James Harris Gallery is pleased to present James Hayward: New Work, a small suite of monochromatic paintings with alluring, thickly textured surfaces. Although he has shown extensively across the west coast, this will be Hayward’s first show in Seattle, where he received his MFA from the University of Washington in the early 1970s. Bringing together color, gesture and materiality in his nonrepresentational work, Hayward offers a uniquely intimate visual experience that rewards a first-hand encounter. Executed loosely in vivid hues, the gorgeously textured abstractions shift seamlessly between image, structure, and meaning. An exercise in highly controlled specificity, Hayward’s defined focus on the monochrome remains the intellectual and emotional foundation revealing the uncertain boundaries between representation and reality.

A prominent west coast painter of our time, Hayward has been exploring monochrome and the properties of paint for nearly forty years. Hayward’s early work of flat Automatic Paintings were included in the famous 1977 exhibition “Less is More” at Sidney Janis Gallery in New York alongside his east coast counterparts: minimalist painters Robert Ryman, Brice Marden and Robert Mangold. In the 1980s, Hayward was inspired by his the calligraphic mark during his fellowship in Japan, and his work turned more gestural with the heavy impasto treatment he continues to develop today.

With a disdain for control and authorship exhibited by the previous generation of Abstract Expressionists, Hayward removes his critical eye and is deeply committed to a consistent practice of restraint. He resists conscious decision-making, allowing structure to take form without interference or rules. In this way, Hayward’s mark-makings refute hierarchy. Every subsequent marking is pivotal to the physicality of piece. The monochromatic palette of this body of work ranges in colors from subtle grays, to fleshy tones, to bright acidic hues. Within each color there exists unlimited phenomenal variations embedded in the textured surface. The thickness of the paint demonstrates a system of excess, where the surface structure precariously pushes near to the point of collapse.

His paintings are phenomenological objects: candidly self referential and devoid of any figuration. They are about the physical markings themselves, all equally important to the overall structure of the piece. Hayward compares his work to Jazz, where the composition is confirmed only in the instant. As self-contained entities, the reception of the work is reflected within the work itself; that is, oriented on discovery. 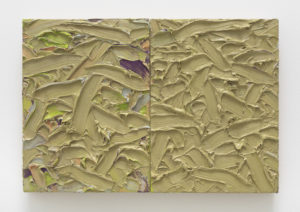 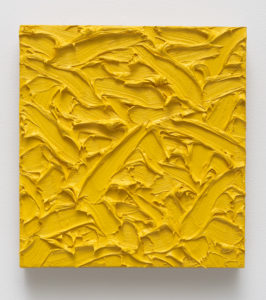 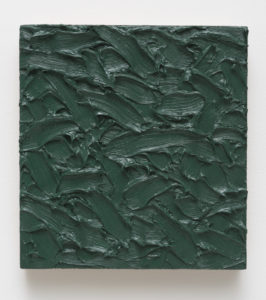 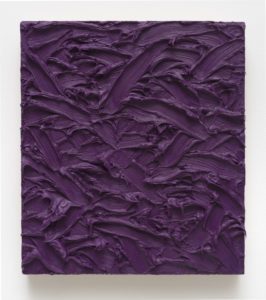 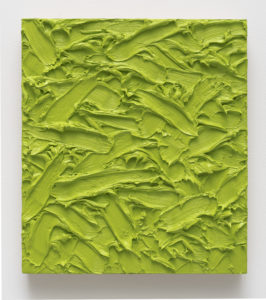 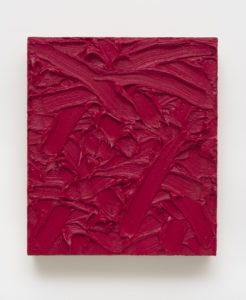