James Harris Gallery is pleased to present our fifth exhibition by Claire Cowie. Educated at the University of Washington and Washington University, St. Louis, the artist has been working for well over a decade.

This small exhibit of recent works centers around a large scale, multi-panel, mixed-media work on paper titled Dead Reckoning, which is a term used to describe the process of estimating one’s current position based upon a previously known position and the distance, speed and direction one has traveled. Historically, the nautical form of this navigation was unable to take into account less controllable forces such as winds and currents. Since new positions are calculated solely from previous positions, the errors of the process are cumulative, causing the ship to drift further off course with every mile. A navigator’s good, though subjective, judgment was also necessary to guide the ship well.

In this piece, Cowie began with the central panels and built the image outward. A number of times, she came back to the center, reworked the image and again proceeded to add and edit outward, coming to new conclusions each time. The piece changed constantly, but bears markers of the entire journey. Though Cowie’s process is largely intuitive, she represents here an interest in mapping out the more human, fallible process of charting one’s progress and rectifying mistakes along the way.

Like much of Cowie’s past work, this piece uses multiple perspectives and multiple points of view as well as a shifting sense of scale to move from inside to outside and to track a circuitous path. Cowie’s typical use of broad areas of negative space is still visible here in many places, but this piece is decidedly more dense, complex and saturated than before. The underlying grid formation references storyboarding and linear progression, but also highlights the fragmentation of memory and time. Windows isolate particular moments and further this sense of fragmentation and limitation. What seem like repetitive elements actually exhibit distinct variations, addressing the role of assumption in our experience, and challenging the trustworthiness of landmarks.

By incorporating characters, Cowie brings into question who is recording and who is being recorded. What does it mean to witness something when we can’t trust the accuracy of our experiences? The way we return to our past, reflect and constantly adjust for external elements affects our internal sense of direction; often we find things we weren’t looking for and reach an unpredicted destination. 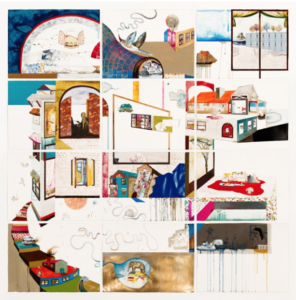 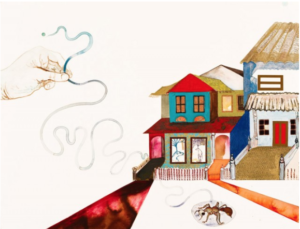 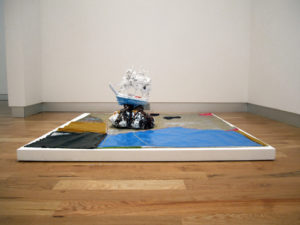 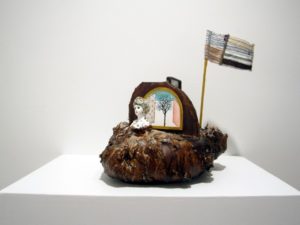 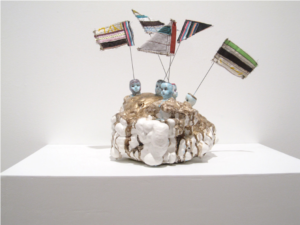