James Harris Gallery is pleased to present Parallax Effect, a group exhibition of contemporary works by four of our represented artists. The show includes images by Richard Rezac, Mark McKnight, Amir Zaki, and Adam Sorensen. In these works, our interaction with landscape is mediated through planes of perception created by the artist. The topography of the landscape is shifts with new perspectives, and calls into question the understanding of dimensionality across differentiating planes of sight.

Parallax is a displacement of the apparent position of an object when viewed along two different lines of sight, and is measured by the angle of inclination between those two lines. Essentially, it is a perspectival truth based solely on geometric calculation when our lines of sight are deceptive. Parallax Effect refers to a technique in computer graphics where background images move past the camera more slowly than foreground images, creating an illusion of depth in a 2D scene and adding to the sense of immersion in the virtual experience. By utilizing a panning and zooming effect, something like a video from still images is created.

In relation to this concept, the selected works demonstrate how each artist creates a topographical conversation regarding alternative experiences of landscapes with the techniques of planar layering, repetition, and perspectival displacement. 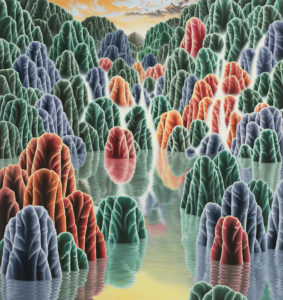 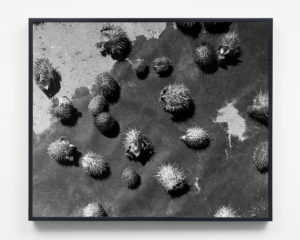 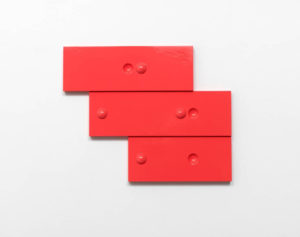 Mark McKnight practice is an ongoing engagement with the craft and materials of “traditional” black and white photography. Through careful use of the fundamental tools of his medium—framing, composition, use of light and shadow—he produces an embellished reality through bleak, darkly printed photographs that foreground his subjective, existential, and poetic concerns.

“Landscape painting affords me a wealth of tradition and influence, and provides a platform that seems familiar and recognizable. 19th century romanticism, Japanese woodblock prints, and Abstract expressionism all factor into my works vocabulary. I work primarily in a reactive sense. A certain rock may lead to another, which in turn may lead to a specific tree. The scenes I end up composing, function as both utopian and eerily post-apocalyptic. Both of which can be seen metaphorically as social concerns in contemporary life. By inviting the viewer in visually, I ask them to recall where we have been, explore where we are now, and confront where we may be headed.”  - Adam Sorensen

Adam Sorensen lives and works in Portland, OR. He had a solo show of his work at the Portland Art Museum in 2011, and shows extensively around Portland and Seattle. The artist has work in the collection of the Boise Art Museum, Seattle University, Portland Art Museum, Progressive Corporation among others. His paintings have been shown nationally.